A test with product placement of spaghetti 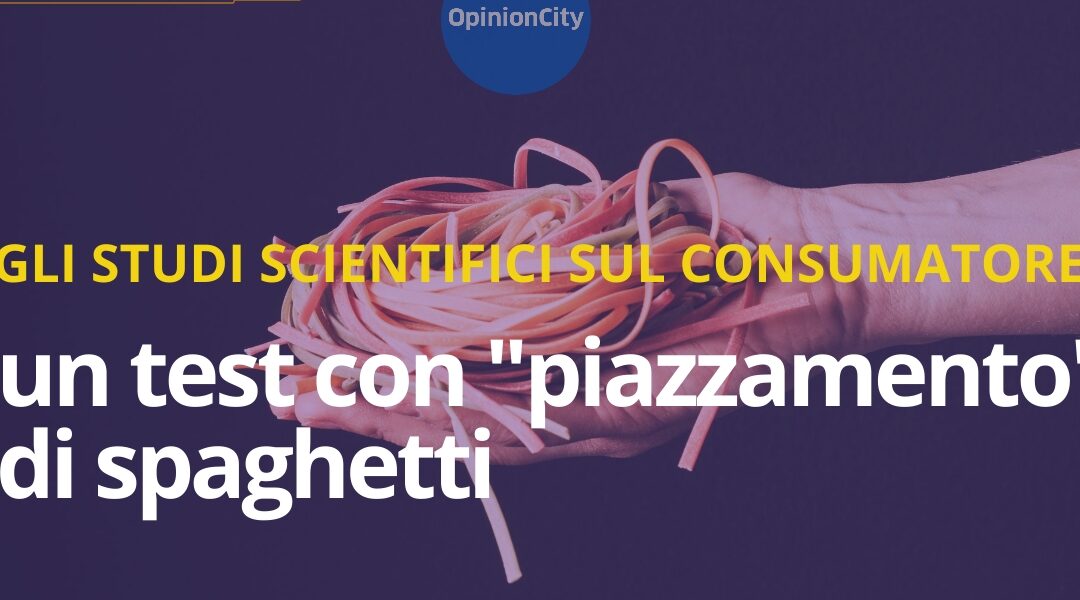 What cannot be missing on the Italian table? The pasta!
Testpoint recently carried out a research to evaluate the satisfaction about some types of spaghetti by sending the package with the samples to the home of the respondents recruited for the research and inviting them to use them according to their normal habits.

“Placement” for a home product test

In the language of market research, the term “placement” indicates, among other things, the sending of a package to the home of the people selected (“recruited“) for a test. The package contains the products to be tested, without their original packaging so that the brand is not recognizable (it is said that the products are “de-branded”) so as not to influence the evaluation and identified by a code.
Testpoint carried out an interesting research on pasta: 5 different brands of spaghetti that had to be evaluated by 100 people in different Italian cities.
The first step was, as always, to recruit people willing to participate in the test in the various cities: the participants had to be both women and men, regular consumers of pasta, appropriately distributed in different age groups.
The second step, on the other hand, consisted in preparing the boxes to be shipped: each box had to contain a package of the spaghetti tested together with four other packages of competitors. Each package of spaghetti was identified only with a code. The box was packaged with extreme care in order to avoid damage and breakage during transport.
And finally, here we are at the final stage: the shipment of parcels by courier to the respondents’ homes in different cities.
In the box, in addition to the packs of pasta, there were instructions to be followed scrupulously: the spaghetti had to be consumed following the tasting order indicated by the instructions (the tasting order is obviously not the same for all consumers, indeed it is assigned following a balanced rotation order) and according to the usual habits, with sauce, at least twice a week. Once the tastings of a type were finished, a short online questionnaire relating to the tasted product had to be answered.
Then respondents could move on to tasting the second product: another week of tasting according to the methods described, and then filling in the questionnaire relating to the second product.
And so on for all the products.
In the package, the respondents also found a hard copy of the questionnaire, so that they could take brief notes during their tasting and be so confident not to get confused when they went to fill out the online questionnaire.

How the test was carried out

Let’s ask one of the participants to tell us about her experience. This is Marina, 45 y.o., from Rome, a housewife and mother of two children:
“Pasta is never missing on my table, we eat it at least three or four times a week, cooked in various ways and with different sauces, from simple tomato and basil to vegetable sauces or something more elaborate on holidays. This is why I was very happy to participate in this test. I received a carefully packaged parcel containing five different types of spaghetti. On the packaging there was no brand but only a code. This confused me at first, but then I realized it was an important thing because my judgment was absolutely not influenced.
I followed the instructions carefully – it was simpler than it might seem at first glance. I simply had to prepare the pasta as I usually do, one product per week, and at the end of each week of tasting I answered the questions in the online questionnaire about pasta appearance, flavor, cooking, sauce holding, etc.
Filling in the questionnaire didn’t take much time, about ten minutes at the most. At the end of the last questionnaire, I was asked to indicate which of the five types of spaghetti I liked best. The experience was exciting for me: I was happy to be able to express my opinion on such a widely consumed product. I hope that my contribution, even if small, can help improve something we all eat every day.”