A taste test for a “light” croissant 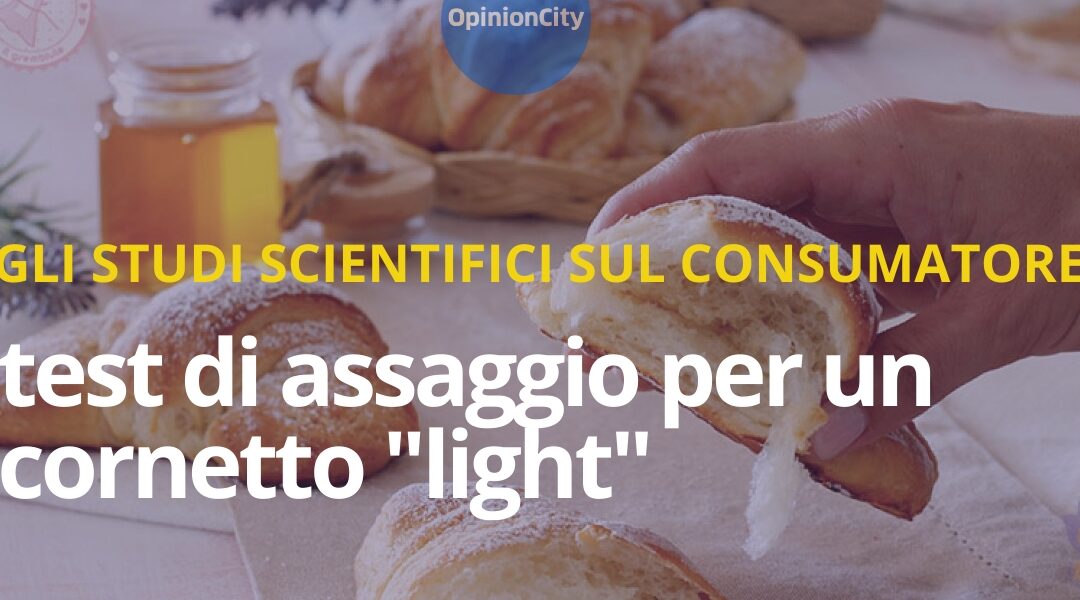 Nowadays, companies in the food sector are increasingly careful to launch healthy and nutritionally balanced products. But would you have ever imagined that to decide the ideal composition of a croissant with a reduced quantity of added sugars you could carry out a market research by inviting the regular consumers of this baked product for a taste test? Testpoint recently tried to answer this sweet question. We will tell you how it went.

A taste test in central location

Imagine being the manager of a large company that produces breakfast croissants, those beautiful fragrant croissants that are cooked and sold in the bakery corner of supermarkets. Then imagine that you want to launch a light version of your product on the market, with a reduced content of added sugars.

How would you know if yours is a winning idea that is worth investing in? And how would you determine which is the minimum percentage of sugars that allows you to maintain the flavor of your product, so appreciated by consumers? Simple, you need to carry out a taste test.

Recently Testpoint conducted an interesting taste test in central location to evaluate the liking of some “light” recipes (i.e. with a reduced quantity of added sugar) of a breakfast croissant of a well-known company.

The test was carried out in Milan on subsequent days: on each day several taste sessions were conducted and, in each session, 10 people were invited to taste the croissant currently on the market and two of its variants.

How was the taste test carried out?

Let’s see it step by step. The central location of Testpoint is equipped with a professional kitchen with ovens, induction hobs, fridge, freezers and everything that may be necessary to carry out the most different taste tests. In this case, however, it was a matter of preparing and tasting the croissants that are sold in the “bakery” corner of supermarkets, where these products arrive frozen and must therefore first be defrosted and then cooked in special ovens.
For this test, an oven identical to that used in supermarkets was used and the preparation and cooking were strictly supervised by a manufacturer company technician, who had to check the oven temperature and cooking times so that the product to be tasted was identical to that on the market.

The test room was set up as in all tests of this type with single workstations with white tables on which a person of the staff served each product on plastic plates with the identification code of the product to be tasted.

On the table there were also a bottle of natural water and unsalted crackers to cleanse the palate between tastings. Each respondent also had a tablet on which the questionnaire guided them step by step in the tasting process and showing the questions to be answered. All respondents were first asked for a visual evaluation of the product, then the olfactory one and finally it was possible to proceed with the tasting.

Let’s ask one of the participants to tell us about her experience. This is Graziella, 35 y.o., from Milan, employed in an office:

“I was contacted by telephone by a very kind person who asked me if I was interested in participating in a tasting session of breakfast croissants. I often buy a croissant at the supermarket in the morning, going to work and therefore I am quite an expert! My profile met the one they was looking for, so I agreed to participate. I have been advised not to eat or smoke for at least an hour before the test, not to use lipstick and not to wear perfumes.

After a brief introduction in which we were given some information (we were advised not to talk to each other and to turn off the cell phones in order to be absolutely focused on tasting), we entered the room: I had no idea that there were facilities like the one I saw! The room was set up with workstations, all the same and all white, the people who brought us the croissants wore professional aprons, caps and gloves, the plastic plates were all white and with an identification code for each product.

The whole test was guided step by step by the questionnaire on a tablet: for each product, questions appeared which had to be answered, first on the visual aspect, then on the olfactory aspect. Before proceeding with the actual tasting, we also had to evaluate the greasiness of the croissant which for this reason had been served on a paper napkin.

As for the actual flavor, the questionnaire asked us to describe in detail what we liked and disliked, what we perceived, if we found the product too much or too little sweet, too much or too little buttery and so on.
I never imagined that food products were studied in such an accurate and “scientific” way: the taste test was for me the discovery of an interesting world that I didn’t know.”